Log: USS Nirvana: Completed modifications to V.A.U.L.T. Unfortunately, less than fifty percent chance that the system will be capable of completing all Martian terraforming without the additional modules that were to be part of Mars missions two and three. Military vehicle encoding is still intact, but have added additional vehicles for drilling, scavenging, and water extraction.

The End of the World 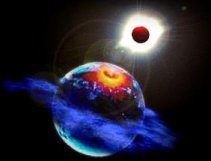 It's tough to say our species survived. When the nameless asteroid, perhaps a mile across, appeared from the sun's glare there was no time to do anything. 46 minutes after it was detected it slammed into the middle of the Pacific just slightly north east of Australia. Saying it hit the Pacific is a bit of a misnomer. It hit the bedrock under the Pacific at 26,000 miles per hour or more. Much of the Pacific simply ceased to be. There was no ocean, just a cloud of boiling water vapor that spread rapidly across the globe ahead of a fireball of indefinable proportions. The Aussies and Kiwis probably never even knew what hit them.

Then the sky started to melt.

Again, it's tough to say otherwise. Sheets of flame and waves of heat came down from the upper atmosphere and vaporized almost every biological form of life. Animals didn't catch fire. they vaporized. People became black outlines on charred walls as if Hiroshima was seeing an instant replay on a global scale. There were no "injured". There were the dead and there were a few thousand "alive". Hidden in mines and caves and military redoubts they lived through the initial impact and firestorm. And miraculously some of them even survived the break up of the continents and the basically total restructuring of the land mass of the planet.

They even survived the 8 degree pole shift and the magnetic flip. And for their durability they got to eventually experience an alien topography more closely resembling Mars than the planet they had last lived on. For nearly a decade a few determined humans, race, creed and nationality unimportant, lived day to day and hand to mouth while the ground stabilized and the dust of a civilization settled out of the atmosphere. When stockpiled supplies ran low they hunted the last of the wildlife to near extinction. And then they waited for something, anything, even if it was only death.

And then the Rhinos came... 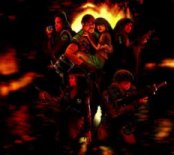 Somewhere some military endeavor survived. Some automated system designed to supply a burgeoning global take over endured through it all. This system produced huge tanks more capable and durable than any before. Fast recon vehicles and massive armor trickled and then spewed forth from shattered terrain that could have once been part of any nation. Chinese? US? Russian? It didn't much matter because the equipment all came with English labels and basic, simple instructions designed to allow a minimalist army to use them effectively. And rapidly a truly minimally trained army put them to use to gain territory and defend fragile homes and perverse dictatorships.

Over the ensuing decades mighty warriors arose, skilled in the handling of these self-contained mobile environmental shells. From era to era Walker and Las Vegas Badboy, Inferno and Saint, an Old Man with a Beer and Tank, Buca, Servo, Titan and Trax rolled across the wastes fighting for territory and simple survival. Allying and turning on each other as existence demanded. The names often passed into history but the battles continue even as what has come to be called the Vault continues to pump out new and bizarre vehicles. We do our best to survive, accept new arrivals devoid of history, and honor those who have gone before, including our once great civilization.

A shadowy leadership of dubious moral character has come to control some aspects of Terra. Sucking up tax dollars and controlling vehicles to the extent they can, The Clan Council makes life chaotic even as they keep the Pirate Rum flowing in their base of operations, the Dregs. But the spirits offset the incompetence it seems. The Hippo Guild, completely unknown as to origin or goal, prowls the Outland stealing anything left idle while Agents, even more clandestine, appear from the Vault or elsewhere to wreak havoc on a dying world. Or maybe try and save it in their own silent and frustrating way.

And finally the Invaders. A tool of the Council? The Agents? Some force from those who created the Vault, the Rhinos and other vehicles of wholesale destruction that drive the destroyed world of Terra? They haven't been seen for a while but nobody doubts they'll return and again disrupt the fragile toe-holds humans have made in a hostile Outlands that no longer resembles Earth. Earth. It's been replaced by Terra and with that comes violence and destruction unknown to man even during the height of his warring 20th and 21st century. You might fare better staying in whatever hole you survived in than come out to this world. But then why are you even bothering to breathe this dirty atmosphere? Fight for something... or give up. Take your piece of Terra and at least leave your name carved in the wreckage.

At 7:23 GMT 2067/06/24 Nirvana NC-101 received a final and unexpected transmission from Mission Control, Johnson Space Center. An asteroid impact has decimated Australia and at least the West Coast of the US. It continues to wreak havoc wih transmissions and telemetry hours after impact. Further communication times are currently unknown. Nirvana is directed to continue with research and terra-forming mission to Mars surface and to await further communication from Mission Control.

We await news and pray for the best for ourselves and our world...